What Contributes to Outdoor Pollution? In Delhi and NCR - BreatheFresh | Natural Solution to Indoor Air Pollution

What Contributes to Outdoor Pollution? In Delhi and NCR 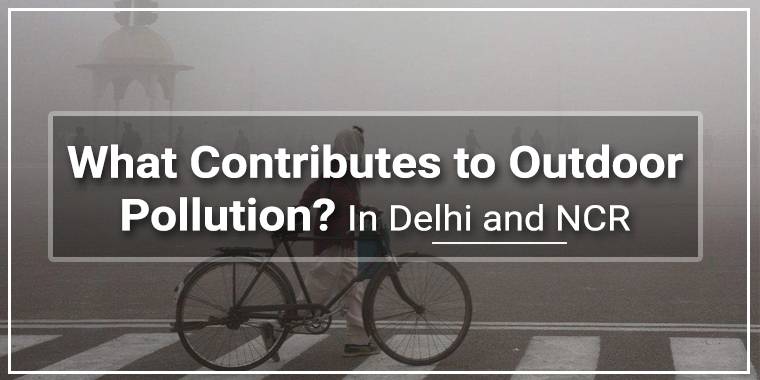 Pollution is our Enemy No.1. And, no doubt it’s more deadly than even the terrorism, which can be combated, smashed and crushed but controlling pollution has become such an arduous task, for Delhi-NCR that is slowly heading towards becoming a gas chamber.

It’s not that Government, Institutions and public at large are inactive to control it. But the magnitude of pollution has become so enormous that every new action to contain it become a drop in the ocean. Every time, it again upsurges with a further larger size and higher magnitude. Every step to contain it, from Odd-Even scheme to closing industries in Delhi to banning Generators all seems futile when it comes to result.

Then, in such a dying scenario, what shall we do?

Shall, we sit silent and keep watching to succumb to it shortly, or shall we apply our wisdom and go to the root cause to control it now, if we fail in nipping it in the bud.

I believe the second part sounds wiser, to understand the cause of pollution and to eradicate it, no matter, what it costs, what it takes and how-so-ever challenging it is.

Let’s take a deep dive and explore what contributes to outdoor pollution.

What are the most significant contributors to major air pollutants?

So, these were the main culprits pushing us in the gas incubator and taking our life. Now, let’s have a look at the major air pollutants caused by these significant contributors.

What are the major Air Pollutants in outdoor pollution?

There are several monsters, which contributes to outdoor pollution. But we will restrict ourselves to the top 7, that leads to more than 98% of the total pollution in Delhi and NCR. Here we go –

Particulate matter is the sum total of all particles suspended in the air and includes both solid and liquid particles. Many of these particulates are extremely hazardous and are near-fatal. They include organic and inorganic particles, both like dust, pollen, smoke, soot and liquid droplets, to name a few.

Most hazardous among them are Coarse PM that are with aerodynamic diameters ranging from 2.5 μm and 10 μm. They are broadly generated by the Physical processes that include resuspension of soil and road dust, sea spray, vehicular abrasion, agricultural tiling, vehicular abrasion and fugitive dust emissions from industrial sources. And all these factors can be controlled with a little effort.

Sulfur dioxide, SO2 is naturally emitted from microbial activity in the ocean and from the anaerobic degradation of organic material happening in terrestrial environments, though the anthropogenic emissions are much larger

The urban and industrialized areas the combustion without emission controls of sulfur-containing fuels and another roasting of sulphide ores to make metal oxides during metal processing are the major cause.

Very high exposure to SO2 occurs from coal burned in residential heating and cooking.

Carbon Monoxide is formed due to incomplete combustion because of poor mixing of combustion air and combustion fuel. On-road transportation (gasoline- or diesel-powered engines), off-road engines, and biomass burning activities are the major sources of outdoor CO.

In rural areas the biomass burning for cooking or heating are the main sources of CO. Forest fires, and the uncontrolled burning of vegetation are the largest source of CO in Delhi and NCR.

The fossil fuel combustion and biomass burning are the major sources of Nitrogen oxides.

The combustion of solid fuels in residences and other microbial activity in the soil are the major contributors in rural areas that are going unabated, resulting in NO2.

It is the primary pollutant that is largely emitted from the agricultural practices like livestock waste, spreading manure and the use of synthetic fertilizers.

6. Lead and other Toxic Metals

7. Other Organic compounds that include VOC’s SVOC’s besides particulate organic matter

Organic compounds that are emitted from the combustion sources like benzene, formaldehyde, acetaldehyde, acrolein, 1,3-butadiene and others are carcinogens and are severely hazardous to humans

Consumer products as solvents, paints and other stationary combustion are the major causes of VOCs in Delhi and NCR.

The other industrial facilities lead to aromatic VOCs, oxygenated VOCs, and halogenated VOCs that results in additional organic compounds.

Other particulates are Volatile metals that include mercury, polycyclic aromatic hydrocarbons, Mineral dust and fibres and Bioaerosols also contributes to pollution.

The Present Scenario in Delhi and NCR

In Delhi, as per Central Pollution Control Board, there are close to twenty to twenty-five areas that lie in severely polluted zones out of which, nine comes under very poor air quality areas.

And, in NCR Faridabad, Ghaziabad and Noida come under severely polluted while Gurgaon comes under very poor air quality area.

The Air Quality Index level in Delhi and NCR hovers close to 416 after Diwali, making it worst area to live in with Government releasing notifications to common people to stay in homes with closed windows and doors leave aside going for morning walks or doing exercise outside.

The poor wind speed as well as poor ventilation index both often delayed the recovery to normalcy. The slow wind leads to persistence of fog (as it doesn’t get dispersed), which further get worse with rapidly multiplied finer particles and bring PM-2.5 as well as PM-1 to worse levels.

Breath fresh Solutions a Delhi based organization is promoting a healthier lifestyle by creating cleaner indoor air naturally and can be reached at https://breathefresh.in/

Does it take the moon to increase your Child’s IQ? Yes! No, no, just hold,...

Why Linen is the best choice for Activated Charcoal Bags

Our Harmful Environment According to conventional wisdom, our homes provide a safe refuge from dangerous...